The Nilesat satellite is a satellite belonging to the Egyptian Satellite Company (Nile Sat), which is a company specialized in television and radio broadcasting services.

It also operates satellite clocks on two satellites (Eutelsat 7 West A @ 7.3° W) and (Eutelsat 8 West B @ 8° W), which are owned by the French company Eutelsat.

The three satellites contain a wide range of free and encrypted Arabic channels, and after Nilesat 101 stopped in 2013 and Nilesat 201 was sent,

which now carries more than 1500 channels, including free and encrypted ones, and at least 300 radio channels. 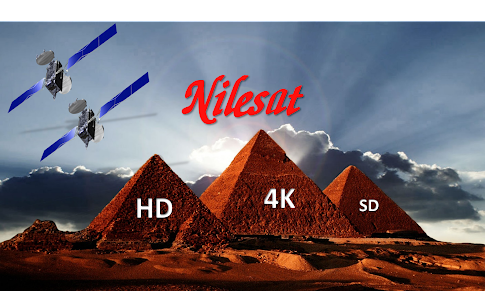 Nilesat is committed to providing a high-quality, reliable and secure digital television service, in addition to providing radio and information network services.

These services aim to fulfill the media's mission to educate and entertain viewers across the Middle East and Africa.

The company also provides a stable and highly reliable service, as "Nilesat" is the main satellite in the Arab world.

What makes it always present in every Arab home, which makes it provide a unique and first-class service,

from the satellite earth stations in Cairo, which is managed by a team of the highest level of experience.

The Egyptian Satellite Company "Nilesat" has launched three satellites, in order to improve its services that meet the needs of people and work to gain their confidence.

The satellites of Nilesat succeeded in obtaining the highest viewership, in light of the space full of satellites.

And that in more than 56 million households, which in turn is more than 270 million viewers in North Africa, the Middle East and the Gulf region.

The Nilesat satellite is located in the distinct orbital position 7 degrees West.

Nilesat-301---- whose contract as a new satellite was signed in December 2019, and will be launched into orbit in the first quarter of 2022.

The main objective of launching the satellites, which bears the name of Nilesat, is to meet future needs and challenges of new applications.

This is by integrating the modern technologies of the new satellite, Nilesat 301,

with the demands of viewers, especially young people, as well as the needs of the Arab family.

The services that will be provided by the new generation of Nilesat satellites are represented in space coverage areas and new services to achieve the following:

Covering the current region in the Middle East and North Africa and discovering new opportunities in the SPOA region and the Nile Basin.

Providing broadcast services in the Ka-Band frequency space over the Arab Republic of Egypt.

Nilesat 201 is one of the satellites of the second generation of Nilesat satellites, and it was manufactured by Thales Alenia Space.

Nilesat 201 is not just an alternative to Nilesat 101, but its goal is to meet the increasing need for Nilesat capacities in the North African and Middle East region.

And also to maintain the advanced position of Nilesat among the satellite operators in the region.

Nilesat 201 covers North Africa and the Middle East, including the Gulf region, in addition to covering all of Sudan.

and 4 satellite channels operating in the Ka frequency domain.

Receiving Dish Diameter within the Coverage 50 To 75 Cm

Nilesat 104 is the commercial name for chartered power in the 7.3° orbit,

and aims to secure more slots for commercial expansion at this vital orbital location.

Nilesat 104B is the commercial name for chartered energy in the 8° orbit, and aims to secure more slots for commercial expansion at this vital orbital location. 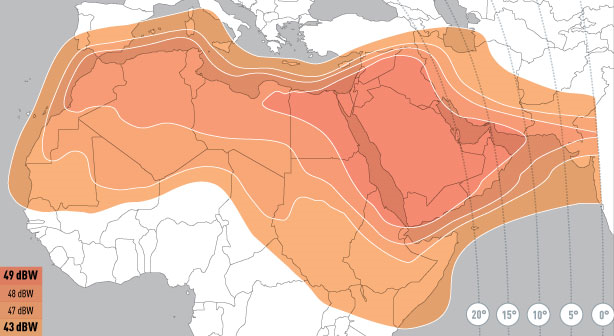 Nilesat satellites carry a variety of TV channels in the region,

through which Nilesat viewers enjoy watching Western programs on OSN and watching sports programs through Time Sport and On Sport channels.

This is in addition to the Arabic programs that are broadcast through OSN,

This is in addition to the Arabic programs that are broadcast through OSN,

The channels broadcast on Nilesat also vary in their content, whether they are sports, children and family, or news other than educational,

in addition to entertainment and documentary channels, music channels, films and series.

The high-quality channels are broadcast via the digital Nilesat platform that broadcasts the channels using advanced H.264/AVC digital compression techniques.

Nilesat had to maintain its leadership in digital broadcasting via satellite, given the growth in the number of HDTV channels in the region.

Also, with the spread of home TVs equipped with high-tech HDTV/UHDTV,

by equipping the digital playback platform with modern technologies and maintaining its development and updating with everything new in the world of digital broadcasting.

The Nilesat digital platform has the necessary technologies to launch and operate UHDTV/4K channels.

As the Nilesat digital broadcasting platform has been updated and developed to keep pace with the times and meet the needs and requirements of operation according to the advanced technology available.

Internet TV services are multimedia services that include television,

video services, broadcasting services, text services, graphics and data that is transmitted over networks that use Internet protocols.

Internet television is similar to normal television, as well as with the characteristics that it can provide,

but there are some differences, which are that it is broadcast through Internet protocols.

Internet TV services can be interactive, including but not limited to scheduling of favorite shows.

In addition, through the video-on-demand feature, the user can choose a movie and watch it at the same moment or later.

with a quality similar to the usual satellite broadcast quality through the infrastructure of Internet networks,

which is delivered directly to the user in a live image or by viewing on demand. 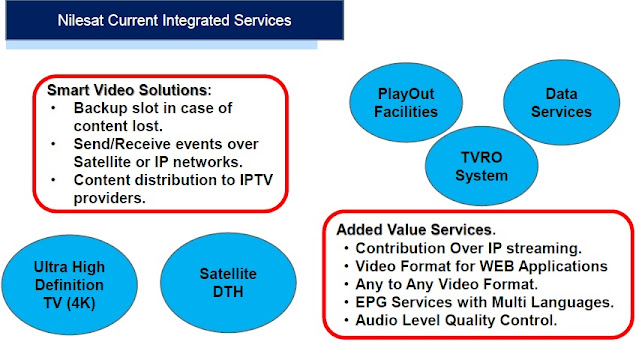 When you want to launch a TV channel, it will make your task faster, simpler, and safer by using Nilesat's new scheduling and broadcasting system,

The new system adopts an internet-connected design to give you the best usability and reliability features.

• A fully automated system from entering content and even broadcasting.

• A master control room for each TV channel.

• The possibility of remote communication to monitor and control channels.

• Support for multiple systems for input and display.

Nilesat provides digital radio and television broadcasting services in the coverage area of ​​its satellites.

The content that is broadcast from different places can be delivered via satellite or through optical fibers from the studios of the Egyptian Media Production City to be sent to the main Nilesat center in Cairo.

Where the content is prepared after receiving it to be broadcast to the Nilesat satellites through the uplink to be presented and displayed to viewers.

Currently, Nilesat broadcasts 700 TV channels, most of which are broadcast to the wide coverage area with a common language and culture.

It provides a quick and easy way for customers to use the capacities provided by Nilesat.

And that for a period of time at any time this service is requested anywhere within the coverage area of ​​the Middle East and North Africa.

Transferring television broadcasting services to transmitting stations, where Nilesat provides this service on many satellites,

This is done through the use of different digital compression methods.